Speed up deployments with PDQ Inventory and precise targeting 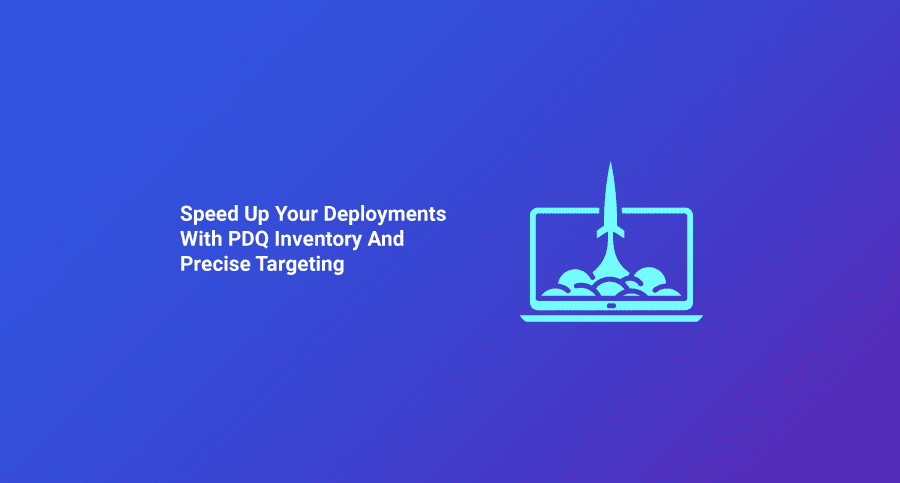 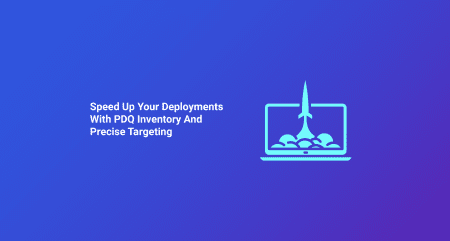 There’s no question that when it comes to deploying applications, PDQ Deploy is the bee’s knees. Nothing’s easier than downloading an application from the package library, pointing it at a bunch of computers, and smashing the “Deploy Now” button. It’s fast, doesn’t require much thought, and most of the work is done for you by the wonderful folks here at PDQ.com, thanks to the pre-built packages in the package library. This approach, for the most part, is fine, especially in smaller network environments. However, once you start managing and deploying to thousands of devices, this approach of deploying first and asking questions later may lead to sluggish deployments and unnecessary network traffic.

PDQ Inventory, speeding up your deployments

PDQ Inventory is the MacGyver of the sysadmin tools. On its own, PDQ Inventory is incredibly versatile. If you want to learn more about some of the things PDQ Inventory excels at, check out our "Most Asked Demo Questions" blog post, where I highlight a few of my favorite features. Today, we'll focus on PDQ Inventory features that help take our deployment game to the next level. If you don't already have PDQ Inventory, don't feel left out. You can still follow along by downloading our 14-day free trial. 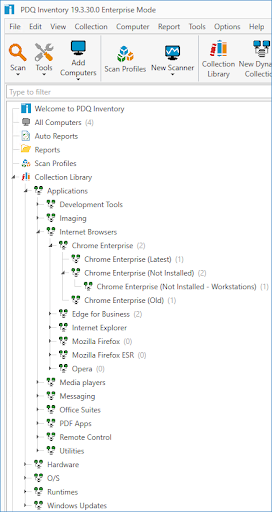 The image above is a screenshot of PDQ Inventory's collection library, which itself is made up of a ton, and I do mean a ton, of pre-built dynamic collections. To be a little more precise, PDQ Inventory comes with over 1,100 collections baked in. While it's true that we don't have a collection for every single application or trojan available on the internet, we pride ourselves in covering a vast majority of the popular and even some not-so-popular applications.

To understand how these collections work, let's focus on one specific application and break down what's going on. 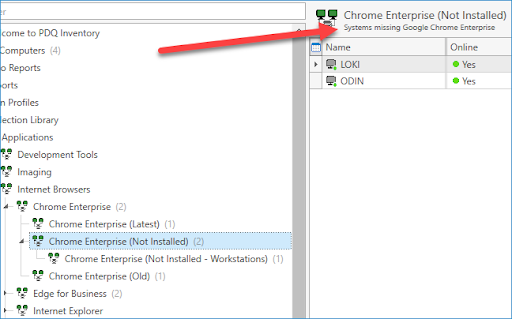 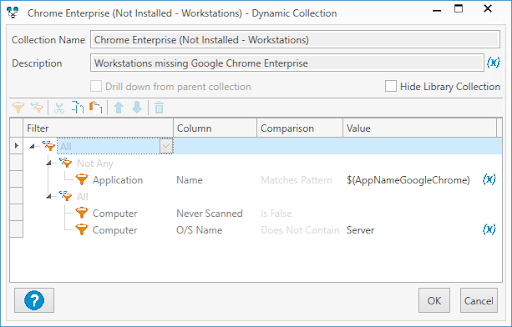 From this screenshot, you can see that this collection is filtering for computers that do not have an application installed with a name that matches the variable $(AppNameGoogleChrome), which is just a placeholder for Google Chrome. It's also checking to ensure the computer has been scanned before and that the O/S name doesn't contain the word Server in it. So if a computer doesn't have an application installed called Google Chrome, it's been scanned before, and the O/S doesn't contain the word Server, then the computer will meet the conditions of the collection, and it will automatically be added as a member.

Scenario A: No dynamic collections

The same situation as Scenario A, a new version of Google Chrome was recently released, and you need to ensure it gets deployed to all of your workstations to fix a vulnerability. Since you have PDQ Inventory which has a built-in dynamic collection for Google Chrome, you can quickly discern which computers already have the latest version of Chrome, which do not, and which don't have it installed at all. The Chrome Enterprise (Old) dynamic collection shows that only 200 computers are running an old version of Chrome. In PDQ Deploy, you target the Chrome Enterprise (Old) collection with your Chrome deployment, which deploys Chrome to only the 200 computers that needed it, saving you bandwidth and time.

The results between these two scenarios are drastically different. The best part about scenario B is that it didn't require any extra effort. The dynamic collection is already built into PDQ Inventory. Once PDQ Inventory scans your environment, computers will automatically be distributed to the various dynamic collections depending on which filter criteria they meet.

Okay, you get it, you're sold on the idea of dynamic collections, and now you want to see how it works.

If you're like me, doing things manually is the last thing you want to do. That's where schedules in PDQ Deploy come in handy. Schedules will automate your deployments for you. Combine that with dynamic collections and heartbeat triggers, and you've got yourself a winning combination. What's a heartbeat trigger? Heartbeat triggers are the best way to ensure packages get deployed to offline targets. Instead of using an aggressive schedule or the retry queue to reach those offline targets, which can put a lot of strain on network bandwidth, the heartbeat trigger will kick off a deployment when PDQ Inventory detects that an offline computer has come online.

Here's how to create a schedule with a heartbeat trigger that targets a dynamic collection.

Congratulations! Not only have you set up your deployment using best practices, you've also configured it to run on its own, so you don't have to deploy it in the future manually.